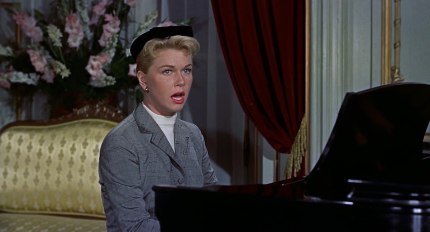 It is with sadness we announce the death of Doris Day who died today, Monday May 13th 2019 in her Carmel Valley home, California. She starred in only one Hitchcock film, The Man Who Knew Too Much, but gives a memorable performance and famously sings Que Sera Sera, as well as famously screaming in the climatic scene in the Royal Albert Hall.

Doris Day mentioned in her 1975 autobiography In Her Own Story that initially she found working with Hitchcock challenging during The Man Who Knew Too Much as he never gave her any direction and she felt ignored. But as her hairdresser Virginia Darcy reassured her, “That’s good, that means you’re doing OK.”

Hitchcock expected his performers to do their job and he’d only interfere when they didn’t. Doris in fact gives a remarkable performance in The Man Who Knew Too Much, especially in the scene when she finds out that her son has been kidnapped. “It’s the best thing she’s ever done,” said director Peter Bogdanovich in his interview with Hitchcock who himself agreed.

That didn’t prevent Doris the professional from still worrying. But when Save Hitchcock interviewed her in 2012, Doris had only fond memories to say about Hitchcock; “He was just Mr. Hitchcock, wonderful, a great director and a good friend. I loved working with him. In The Man Who Knew Too Much he shot the scene when I find out that my son is kidnapped from many different angles and he always knew exactly what he wanted. When filming in Marrakech, we’d go out to dinner with Mr. Hitchcock and Jimmy Stewart. After dinner Jimmy would play the piano and it was a wonderful time. I wish I had the chance to do more than one film with them.”

As well as her film work, Doris was a passionate animal lover. She worried about the welfare of the animals she saw while filming in Marrakech, remembers Virginia Darcy, and would often give food to the animals on set. Her love for animals became a life long vocation. Rest in Peace, Doris.